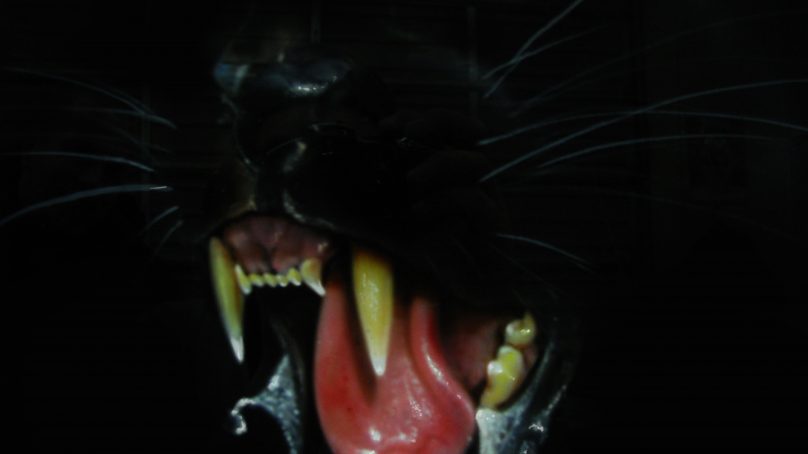 According to Cherokee legend, a woman was suspicious of her husband’s behavior during his time hunting.  In order to find out what he was doing, she wore an animal hide and roamed the area he was known to hunt.  However, local shamans discovered her, and to punish her, spells were cast to permanently attach the hide of the animal to her skin.  As a result of the woman’s suspicious ways, the Wampus Cat Beast was created.

In many parts of the Appalachian Mountains of the Southeastern United States, tales are told of large predatory cats that roam the mountains.  Known as the Gallywampus in Missouri, and Whistling Wampus in Arkansas, the most common name is the Wampus Cat.  Running on all fours, it is seen most commonly just before dark or right before sunrise.  Like the Grim of magical lore, the Wampus Cat has a pitched howl, bright yellow eyes, long, jagged teeth, and is thought to be an omen of bad luck for those who come into contact with it.  Those that stare into the eyes of the Wampus go insane. 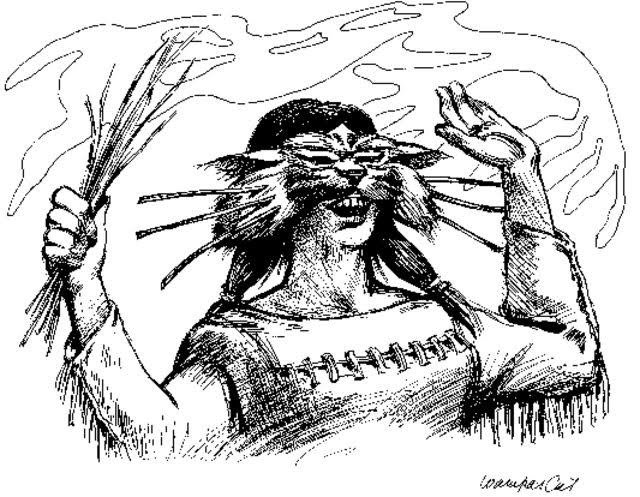 The Cherokee had another legend of the Wampus Cat in that it was a demonic spirit known as Ew’ah, and the bravest warrior of the Cherokee, Standing Bear would go out, with holy weapons provided by shamans, and confront the demon.  After a good-bye from Running Deer, his wife, Standing Bear set out.  Weeks went by without word from Standing Bear, until one day he returned on the brink of madness.  Not being able to calm the once stout warrior, Running Deer feared her husband would forever be lost, and she sought council with the tribal shamans.  The shamans told Running Deer she must defeat the demon, and with gifts of a Bobcat mask and a special black paste that hid her scent from the demon, she set out.  After several days, Running Deer finally came across the Ew’ah as it drank from a mountain stream.  Wearing the Bobcat Mask, Running Deer attacked the Ew’ah, and the demon was overcome by the spirit of the Bobcat mask.  As the Ew’ah fell into the stream and was banished, Running Deer returned home to become the tribe’s hero and protector.  To this day, people of the region believe that the Wampus is Running Deer continuing to protect her people and lands.

For those who have claimed to have seen the Wampus Cat, sightings call it a half-woman, half-cat creature which is in line with the Cherokee origin myths.  The Wampus is known to kill animals and has a rank odor about it that signals its presence.  One of the most terrifying aspects of the Wampus is that it is also thought to steal children and consume them as well as any other person unfortunate enough to come across its path.