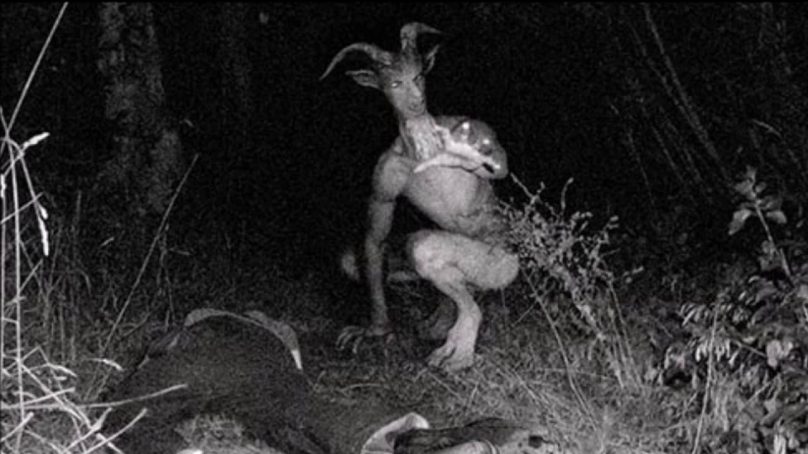 The eastern states of the United States have been some of the longest settled areas of the country, but despite the presence of civilization, there is still a weirdness that pervades the region.  The state of Maryland offers a wide variety of supernatural occurrences from hauntings to sea monsters.

One of the most interesting cryptid stories to come out of Maryland is that of The Goatman.  Similar to the German folktale of Krampus, the Goatman is between six and seven feet tall.  It is covered in hair with fiery red eyes and a lower body similar to a goat with cloven hooves.  The Goatman stands on his satyr-like hind legs and likes to make its presence known through emitting a high-pitched squeal.  The Goatman also has an affinity for mutilating pets with its hands and/or the large axe it is said to carry.  Unlike Krampus, the Goatman haunts the Prince George’s and Calvert Counties of Maryland year-round, not just on the Holidays.

According to local legend, the origins of the Goatman are related from a medical experiment gone horribly wrong in the early 1970s. The Goatman is said to have come from a failed experiment with human and goat DNA that was conducted at the Beltsville Agricultural Research Center.  When the experiment went wrong, a scientist became infused with goat DNA changing him into a hybrid monster.   Since this accident, the Goatman has been rumored to be stalking the remote areas of these Maryland counties.

One of the best accounts of the Goatman came from a sighting on November 3, 1971.  While at her home in Bowie, MD, April Edwards saw a large man-shaped creature in her backyard.  Fearing for her safety, Mrs. Edwards went into the house, and called the authorities.  No trance of the beast was found, but shortly after, Mrs. Edwards’ dog, Ginger disappeared.  The next day, several locals found just the head of the dog presumably cut off with the axe of the Goatman as a warning to his presence in the area.

In the weeks after the finding, sightings of the Goatman continued into late November.  Accounts and sightings of the Goatman today center around points in the area known to be a lover’s lane.  The Goatman is attracted to these areas potentially by the pheromones of teenagers in love.  Teenagers have reported not only seeing the creature, but being attacked by it as well as it brandished it axe.   These recent attacks have kept local residents vigilant to the possibility of Goatman attacks.

If you find yourself traveling through Maryland in the Fall, you’ll see some beautiful sights.  If you look closely in the woods, you might find something looking back at you.  You might be lucky enough, or unlucky enough, to come across the Goatman.