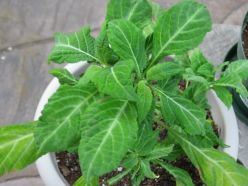 For centuries, the Mazatec Indians in Oaxaca, Mexico, have used the plant salvia divinorum in their shamanic rituals. Based on their history of use as well as other research that has demonstrated no toxic or addictive potential of the plant, I decided to explore for myself this entheogen’s mind-altering effects. The experience is nothing less than amazing, and it has caused me to question my assumptions of reality. In this post I will attempt to explain what the salvia divinorum breakthrough experience has been like for me. It is my hope that anyone reading this will come away with a better understanding and respect for the power of this sacred plant.

Many people casually refer to it as a hallucinogen, but that word does not adequately describe the true experience. Because it is considered a hallucinogen, many people right away feel they understand how salvia affects the mind. On the web you can find many descriptions of salvia experiences, but even those descriptions do not accurately convey what it’s like. Describing the actual experience is not easy, and many are not able to articulate for others exactly what was experienced. The ones that do describe it are only able to describe, to the best of their ability, what they see. But what they see is unique to each individual, so that kind of reporting isn’t very helpful as a preparatory aid.

The actual salvia experience goes much deeper, and there is actually much commonality in the more profound aspects of its effects.

Experienced salvia users will often say “it is like a dream”. And that is a very useful way to help process experiences that you may have already had.

But just saying “it’s like a dream” doesn’t adequately prepare someone who has not yet embarked on this journey. The reason it that there are two key aspects of dreams that we take for granted and don’t really think about when we consider the dream state. Those aspects involve the change in our consciousness and the change in how we process sensory input.

When dreaming, most people are not aware that they are in a dream (unless they are lucid dreaming, which is a rare and fascinating subject in itself). It doesn’t matter how bizarre or unrealistic the dream is – you accept it without question. Going on a date with a strange woman even though in real life you are married? Working at a job that is a hybrid of several past jobs? Flying through the air as you demonstrate that human flight is possible? No problem. You rarely question these scenarios. It is reality as far as you are concerned, and there is no other reality.

So you have no recollection or awareness that, in another level of reality, you are really asleep in bed. And when you wake up, perhaps it takes a while to realize that it was only a dream. But it’s no big deal. This happens all the time and so you get out of bed and go about your day as if nothing strange has happened.

Now imagine being in this state except that you are not asleep. Far from it, you are wide awake. You go through the experience, through the “dream”, and you have no awareness of who you are other than the person in your dream. But in this case, you are not having a typical dream – you are under the influence of salvia divinorum. 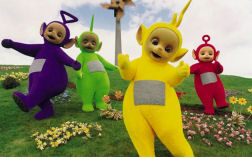 This is where each person’s experience is different. One person believes he is a snowflake. Another thinks she is at a carnival. I once saw teletubbie-like creatures. The details can be interesting but the mind-blowing part is that all the experiences are accepted as reality!

And because you have no recollection of who you were or what you were doing moments earlier, the return to “normalcy” can be incredibly disturbing – if not outright frightening. This is the part that many people do not handle well. One’s entire concept of reality is challenged, perhaps even shattered. It can feel as if reality itself has betrayed you. Because of this, many people do not like this experience at all and vow never to use salvia again.

But how can you not know where you are? you might wonder. Can’t you just see your surroundings and snap out of it?

This brings me to the second vital aspect of the salvia divinorum experience.

There is another dream phenomenon that we often take for granted and think nothing of.

Have you ever been in the middle of a dream when someone tried to wake you? Maybe they called your name, or gently shook you. Maybe there was some faint commotion going on outside, or a knock at the door. But instead of waking up, you incorporated the sounds or feelings into your dream. The knock at the door became a jack hammer demolishing a dream patio. Or the whispered name became a voice amongst a sea of people at a dream carnival.

Again, typically this is no big deal.

But now imagine what it would be like if this happens not only to what you hear or feel, but also to what you see! This is what salvia does. The information received by your eyes is interpreted in completely different ways, and usually in ways that harmonize with the “story” that is taking place within the salvia “dream”.

It reminds me of the optical illusions where your mind interprets the image in different ways.

For example, is this a rabbit or a duck? 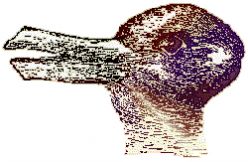 And is this a young woman or an old hag? 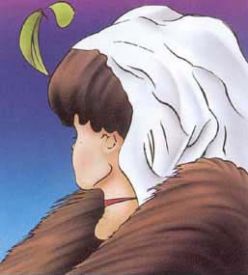 It’s possible to interpret each image both ways. But imagine that in the “real” world, you only see the rabbit and the old hag. In the salvia world, however, you see the duck and the young woman – and only the duck and the young woman. This is what the salvia experience is like for me, where everything I see, hear, and feel, becomes part of another reality that is just as real and just as convincing as consensus reality.

Some might describe it as another reality overlayed over normal reality. And some have described it as another world that bleeds through into this world. But the most interesting description that I’ve heard – and which I can relate to my own salvia experiences – is that it’s as if salvia divinorum retunes your brain to another frequency, and that frequency allows you to perceive a different world. It opens up a different mode of perception that really doesn’t involve the normal senses. I can’t say that I “see” anything – I just “know” it exists and then my brain correlates it to some visual representation.

Salvia Should be Approached Seriously and with Respect

The intensity of the salvia experience depends on several factors, including your own sensitivity and the technique used in “ingesting” the plant.

Chewing the leaves as the Mazatec do provides a longer-lasting but more gentle experience. The effects last about an hour and I’ve found that I have more control over going into and out of the salvia dream. The same level could be achieved from smoking plain leaves. It is when you smoke the higher level extracts, such 10x or higher, that the likelihood of a full-blown “breakthrough” experience increases.

This plant truly is a tool for serious introspection and for exploring your own consciousness. It can help give a different perspective as to the nature of reality and our place in it.