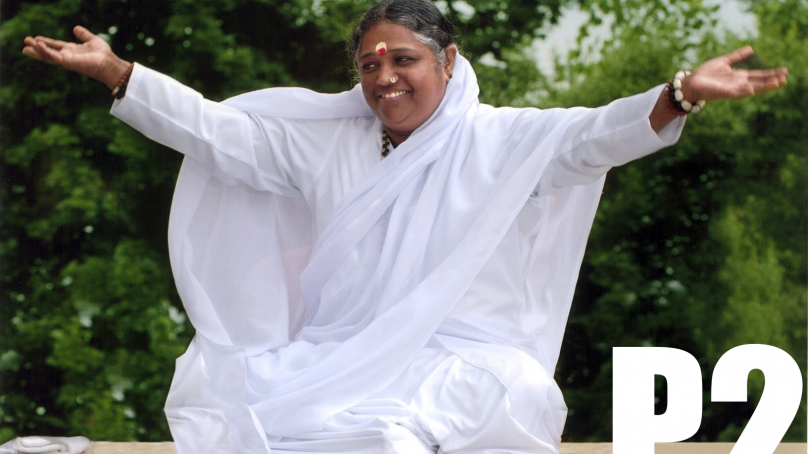 [This is part II of a three-part series. Be sure to read part I.]

When my family and I arrived at the temple at the Mata Amritanandamayi’s ashram in San Ramon, a member greeted us and asked if we were first timers. We said yes, then she placed colored dots on our clothing as an indication of our “status”. There is definitely an effort to make newcomers feel welcome and to make sure that the first experience is a good one.

She also happened to be handing out tokens. These tokens let you know when to get in line for your hug. There are couple of large signs inside the temple that are constantly updated with a range of numbers. When the range includes your token, you can get in line. As part of the effort to make the first-time experience a pleasant one, we were given token numbers in the lower range so we wouldn’t have to wait too long.

Inside, the temple was filled with people. Many were normal looking, but there were also many dressed in robes, sandals, etc. There were large picures of Amma at various places, and the place had a definite Indian feel to it. 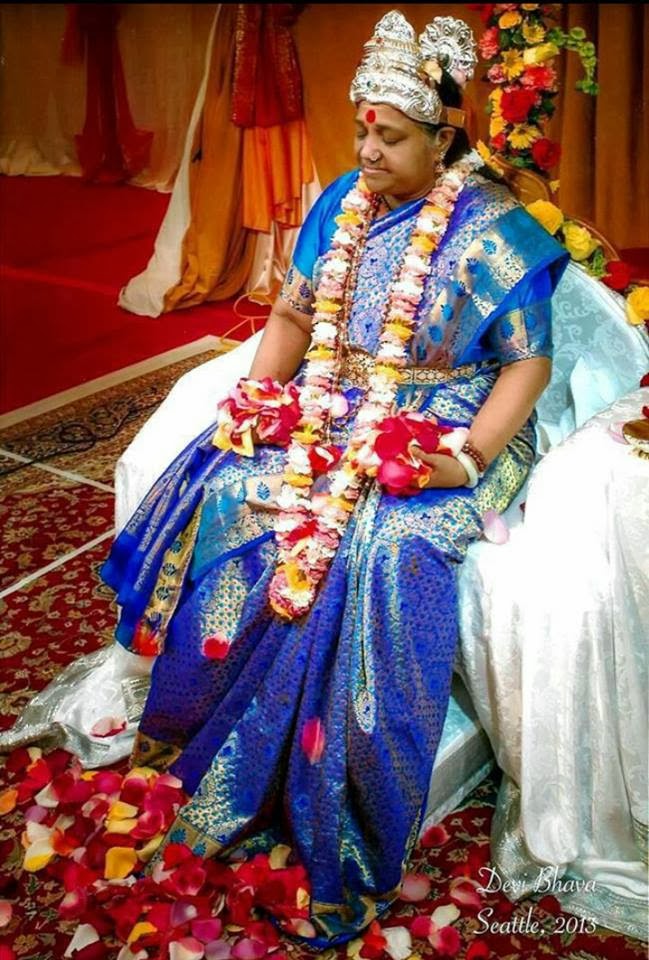 At this point, Amma hadn’t even arrived yet. But the time was close, and already people were gathering close to the entrance and standing on either side of an aisle way where we figured she would be walking from the back entrance up to the front of the temple. And as they waited, you could hear them quietly chanting:

Not wanting to miss anything, I made my way to the edge of the aisle, my family following behind. My youngest son was not thrilled at all to be there. He had a tight grip on my wife’s hand, and he asked her “Mommmmm, why do you let Dad bring us to these things!!?”

Dad, on the other hand, found himself lulled by the chanting, and started to spontaneously chant along with the crowd, “Lokaha samastaha sukhino bhavantu …” (which means ‘may all beings everywhere have peace’). At the time I didn’t know what it meant, or even what the words were, exactly, so I was surprised at how automatic it was to pick up the chant. But it felt very natural. I was enjoying it and realized that I had discovered something good, something that I knew would be a part of my life from that point onwards. And then it happened. 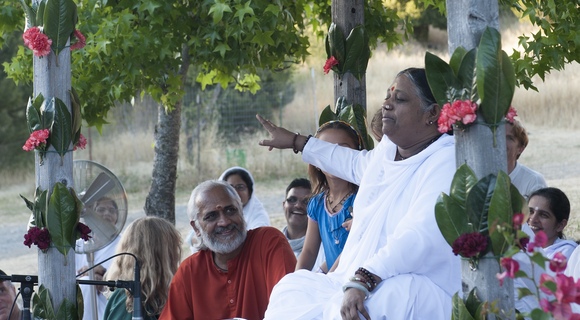 Or rather, she was still a few steps from the entrance but was visible to those who had a clear view out the door. And that’s all it took for the chanting to suddenly shoot up in volume. It was pretty startling for those of use who hadn’t been through the routine before. Immediately my son tightened his grip on my wife’s hand as if he were clinging for dear life. I can imagine how wide his eyes became, too. He wasn’t able to see Amma yet, but he knew something major was happening, and he wasn’t too sure he wanted to find out what it was.

And then Amma really appeared. A short Indian woman, dressed in white, walked through the door, a beaming smile across her face as she greeted everyone with her gaze. People were showering her with rose petals and at one point she took a few petals and playfully pressed them against the ears of one of the devotees. It made people laugh. I was struck by the definite contrast between her friendly, casual demeanor, and the solemn, worshipful, respect shown to her by the devotees.

Finally, she made her way to the front of the temple where she sat down and began offering darshan, her blessings in the form of a hug, and the reason why we, along with hundreds of others, were there that day.