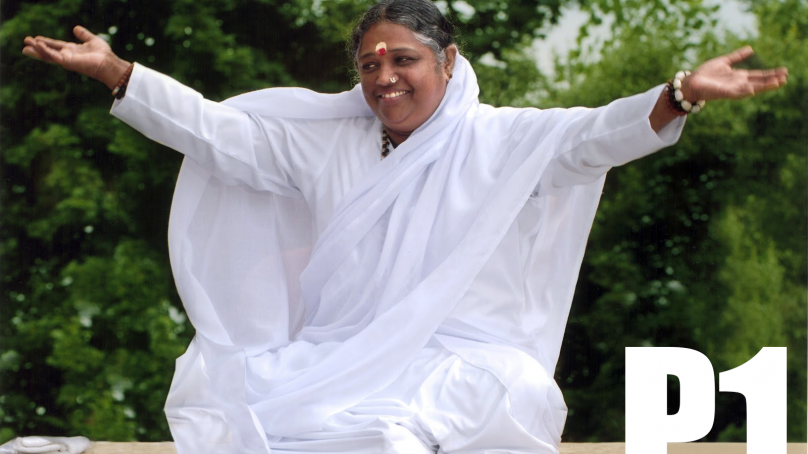 It was just supposed to be an interesting outing, something you do on a Sunday afternoon with your family – maybe a little something different. But when my family agreed to indulge Dad on Father’s day by going to see a Hindu woman who is known for giving free hugs, no one had any idea what they were in for – including myself.

The first time I had ever heard of this woman was quite by accident. At an event at the East West bookstore in Mountain View, a friend and I met a man who said he regularly visited an ashram devoted to a Hindu woman named Amma. My friend had heard of her, “Oh, yes, she hugs people and hands out chocolate kisses”. Not much else was said about her, but a few months later I saw an article in the paper about her plans to visit the area. When I showed it to my wife, she said that maybe we could go see her for Father’s Day. Now normally my family doesn’t share in my spiritual pursuits at all, but in the spirit of the day, they felt – hey, what can one day hurt. 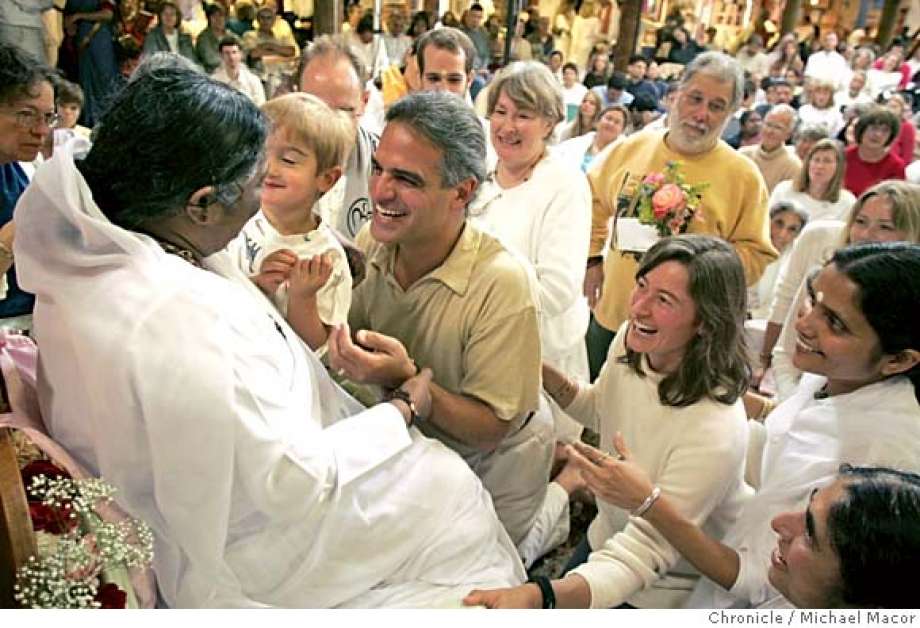 Now all we were expecting was to go to some community park where she would be sitting and meeting people who came up to her. Nothing fancy. Maybe a large crowd, to be sure, but other than that we were expecting to go, check things out, then leave. Following directions printed out from mapquest, we arrived at the main driveway and right away knew that this was not going to be your typical park outing.

Even by the time we pulled off the main highway we had travelled what seemed like a considerable distance deep into the heavily wooded hills of San Ramon. We entered a dirt road, and a long-haired man dressed in a white tunic stopped our van, greeted us and then asked if this was our first time to see Amma. We said yes, then he explained about the carpool arrangement and said that since we had four in our vehicle, we could drive on through. Now to our inexperienced, and I admit, prejudiced eyes, we got a little nervous thinking that this looked like the entrance to some cult compound. The feeling wasn’t helped by the fact that the small, windy road got progressively more rugged and isolated the further we drove.

As we continued on, we would pass a car coming the other direction every so often and noticed that there would be only one person in the car – the driver. “Look!” my wife said, “four go in, but only one come out. I guess you have to sacrifice three of your family.” My boys did not appreciate the joke. 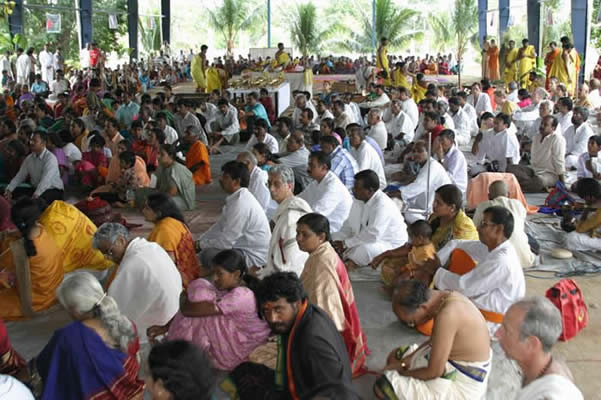 Finally we arrived at an area where people were directing where to park. It was tight parking, and this particular lot was basically an elevated clearing, with our car right by the edge. But at least we had finally arrived, though I could tell my family was not too anxious to get out of the car. What has Chris gotten us into this time, I could hear them thinking. But we had come this far, and everyone did seem friendly (cult members always do). I realized that I needed to appear eager and relaxed in order to inspire confidence from my family. And the truth was by that time I was enjoying the adventure. As we walked from the car we saw others treading the dirt paths on the way to the temple. We were definitely far removed from the hustle and bustle of a familiar world and had entered a foreign place.

And we were about to have completely different experiences.

[This is part 1 of an account about my first time meeting Sri Mata Amritanandamayi. The story continues in part 2: Two Very Different Reactions to Chanting. ]