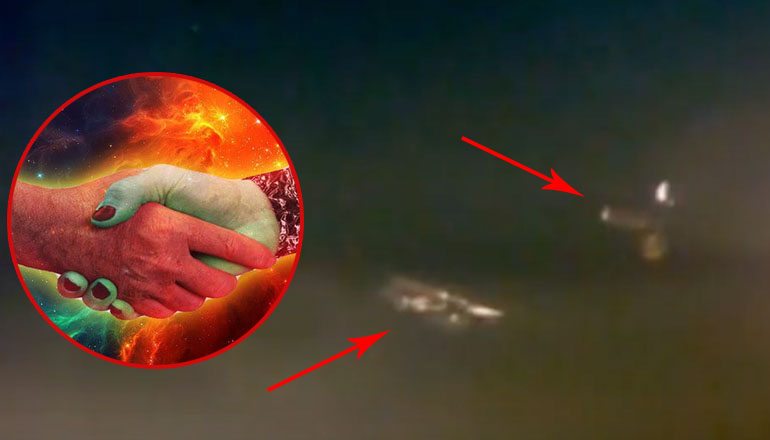 A couple of days ago, the ISS camera unwillingly gave out a strange meeting between two bizarre objects that took place above our heads.

The video was uploaded to YouTube by keen-eyed watcher Streetcap1 and it immediately attracted the attention of UFO enthusiasts. The 7 minute video shows two golden, metallic objects slowly approaching each other but the footage cuts off before the conclusion we were all expecting.

The incident took place in front of the International Space Station and it’s intriguing how this time the feed wasn’t abruptly cut.

During the first 4 minutes of the video, the two objects exhibit a strange transparency and this has given skeptics reason to believe the apparitions are nothing but image artifacts caused by lens flare.

But starting from the 4 minute mark, the shape of both objects starts becoming more apparent. They also appear to make subtle adjustments to their direction and speed, all while lighting up and slowly altering their shape.

Judging by the reactions of YouTube commenters, this incident left the strong impression of an orbital meeting that should have remained secret.

“There seems to be a changing three-dimensional appearance around both objects as light moves around them between 4 and 5 minutes. Both objects appear to have spheres attached.”

“When I review this footage over and over, I feel that the right side image could be the Hubble satellite.The one on the left I ponder about and think is this the Black Knight? This object definitely shows some similar symmetry.”

This strange video allows us to draw some interesting conclusions.

First of all, the two objects’ speed matches that of the International Space Station. Since they remained in view for at least the duration of the video, we can assume the occupants of the ISS were well-aware of the presence of the two, presumably alien objects.

Second, when in orbit around Earth or any other planet/satellite, two spacecraft that have matching speeds usually attempt to dock with each other. This gives us reason to suspect that one or both objects met with the ISS, before or after the footage was taken.

This wouldn’t be the first time such a contact took place. Last year, former NASA engineer Mark McClelland claimed to have witnessed a meeting between astronauts and a 9 foot tall alien being in the cargo bay of a space shuttle. A similar scenario could have just unfolded aboard the ISS.