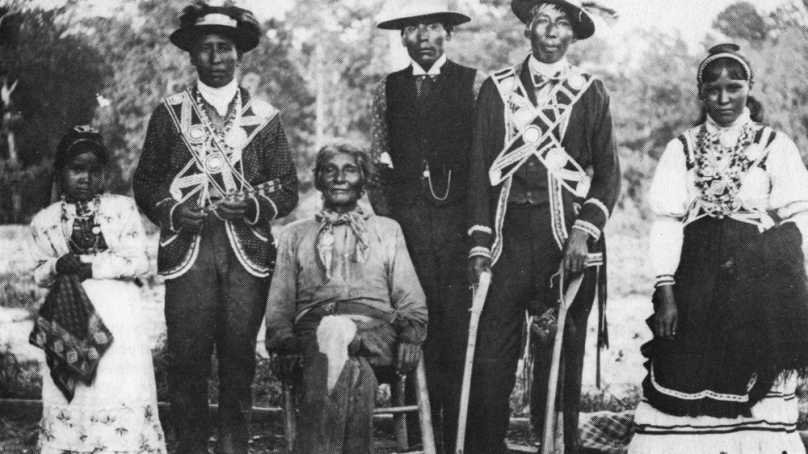 Native American tribes in North America share the belief in the myth of the Cannibal Giant, similar to Bigfoot, but existing on the flesh of people. They believe that these kinds of hominids are wildmen that live in the remaining remote and difficult to access parts of the country. One of these lives in Louisiana, and it is known as Kashehotapalo.
Choosing to make its home in the Louisiana swamps, Kashehotapalo comes from the Choctaw words kasheho meaning ‘woman’ and tapalo meaning ‘call’. Fittingly, the Kashehotapalo is a prankster that likes to frighten people in the swamp by mimicking a screaming woman. The entity never attempts to harm people in the swamp, but it enjoys sneaking up behind it’s victim in order to scream loudly scaring the intended victim. Once this is done, Kashehotapalo turns to run away. It is more of a mischievous swamp dweller than being a danger.

According to Choctaw lore, Kashehotapalo is not a man nor a beast. It has a small head with an evil shriveled face. The body is the body of a man, but the legs and feet of Kashehotapalo are those of a deer with deer hair and cloven hooves. Kashehotapalo could be beneficial to the Choctaw, but if the tribe ever upset Kashehotapalo, then the spirit could warn other animals in the forest of the hunters preventing any animals from being killed. This mischievous tendency of Kashehotapalo was told in the Choctaw story of a tribal youth hunting in the swamps. Being taken further and further into the swamps in search of game, the Kashehotapalo snuck behind the youth and screamed. Turning with a start, the youth got a clear look at the Wildman and returned to his village where he related his experiences.

There are many stories of Cannibal Giants in the various regions in North America. These legends stem from the Native Americans telling stories of large humanoids nearly 15 feet tall with an appetite for human flesh. Through battles with these cannibal giants, Native American tribes tell of pushing the giants back to the remote areas of the continent and away from human settlement.
While Kashehotapalo is classified as a Cannibal Giant, there are no stories in Choctaw mythology that reflect a cannibalistic nature of the giant hominid. This lack of information could be the Kashehotapalo is more concerned with mischief rather than cannibalism, or else all the witnesses have been consumed leaving none to tell the tale.